The Eagle pub in Cambridge was a popular haunt of scientists from the nearby Cavendish Laboratory, and it was here that Francis Crick and James Watson first revealed that they had discovered “the secret of life” - the double helix structure of DNA. 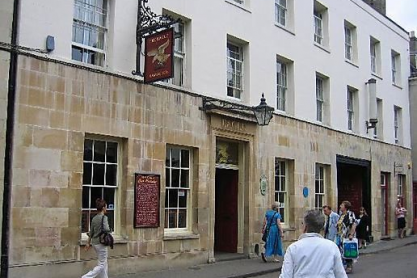 Street view of The Eagle 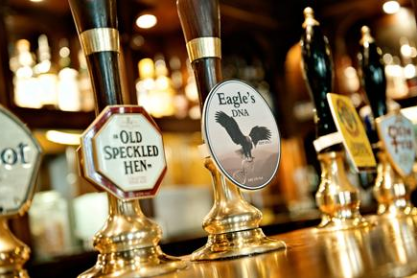 The Eagle, on Benet Street in Cambridge, is still a popular establishment in the centre of Cambridge. An added attraction for visitors is its unique claim to scientific history: at lunch time on February 28th, 1953, Francis Crick and James Watson (at the time working at the Cavendish Laboratory) interrupted diners to announce their ground-breaking findings for the first time.

At the time of Watson and Crick’s revelation, the components of DNA were already known. Friedrich Meischer had isolated DNA in 1869 and since then the work of many scientists, notably Phoebus Levene and Erwin Chagraff, had demonstrated that DNA contained polynucleotide sequences with similar proportions of the bases adenine and thymine, and of cytosine and guanine. Later, important X-ray crystallography studies by Rosalind Franklin and Maurice Wilkins led Watson and Crick to put these findings together: in 1953 they proposed the A=T, C=G bonding pattern and right-handed DNA double helix structure that underpins all life.

Today, The Eagle serves an ale called “Eagle’s DNA” in commemoration of this exciting moment in history. A blue plaque outside the pub also commemorates the event, and was unveiled in 2003 by James Watson.