DNA The recipe for life

The human body uses DNA (DeoxyriboNucleic Acid) as a manual for development and functioning. DNA is a form of information storage. In humans it consists of over three billion 'bases'. 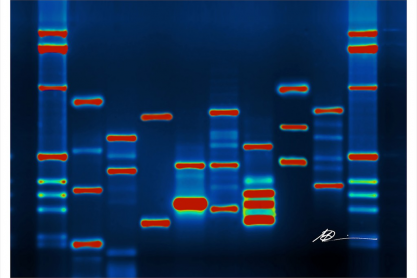 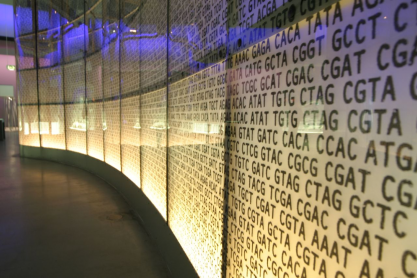 DNA code on display at the Science Museum in London, image by J Goode

Each human cell (except gametes and red blood cells) contains 46 chromosomes, which are made of DNA. DNA is a 'recipe' to make proteins. The 'recipe' is written in bases (adenine, thymine, guanine and cytosine), that pair up and are attached to a sugar-phosphate backbone.

Cells divide during development, and also to maintain cell number as other cells die. During division the DNA is copied to make a new complete set of chromosomes for the new cell. Sometimes errors in DNA replication occur, but most of the time they are detected and repaired. When cells with mistakes that are not repaired, continue to multiply, they can collect even more mistakes and cancer can develop.

Most information known about DNA has been discovered in the past 60 years, since the structure of DNA was determined. This was documented by James Watson and Francis Crick in 1953, who were later awarded a Nobel Prize for this ground breaking discovery. Genetics is a fairly young science and there is much more to be discovered. For example, it is still unknown how much information in DNA is actually useful and how much is 'junk', accumulated over millions of years of evolution.

It was previously thought that identical twins would remain identical throughout their lives as they shared the same genetic material. But, it was discovered that twins who are separated at birth can develop different diseases later in life. This revelation gave birth to the field of epigenetics, which is concerned with the factors that influence gene expression without changing the DNA sequence. Think of it like a recipe – the text stays the same, but if you shuffle the sentences around, skip a few, read them in random order, you won’t get the lasagne you expected. Therefore it is important how DNA is regulated; which parts of it are 'turned on' and when.

The effects that nature and nurture can have on development have been widely debated. Recently some individuals have claimed in court to have 'criminal genes' which predispose them to committing crimes.