Down House Home of Charles Darwin

Charles Darwin lived at Down House for forty years from 1842 until his death in 1882 and carried out many of his experiments in the gardens and greenhouses. 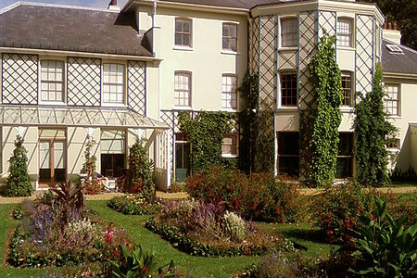 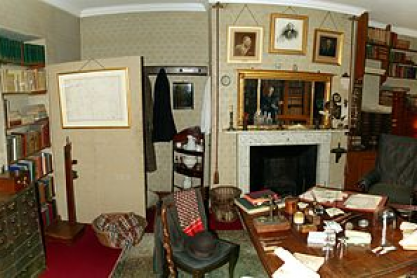 As well as being the Darwin family home, Down House was the place where Charles Darwin conducted many of his outdoor experiments in order to provide evidence for his theory of evolution by natural selection. He used the gardens and greenhouses as a large outdoor laboratory.

Darwin’s family were involved in the experiments. When he wanted to discover why bees went to certain flowers, Darwin got his children to stand in a line across the Great Meadow behind the garden. He dusted a number of bees with flour and whenever a flour-covered bee flew past one of the children, they had to follow it to see which flower it went to. This experiment showed for the first time that bees followed certain flight paths and did not choose flowers randomly.

The countryside was Darwin’s open-air laboratory

Darwin used the gardens to conduct many other experiments. He showed that different species of orchid evolved to attract different insect pollinators. He set up an ‘experiment bed’ where rows of cowslips and primroses were planted so that he could compare the shape of the different flowers and the effect this had on pollination.

It was Darwin's observation of orchids and the insects pollinating them on Downe Bank that provided evidence for co-evolution, and led to the publication of his book Fertilisation of Orchids in 1862. It is also now widely agreed that Downe Bank inspired his conclusion in On the Origin of Species.

The lawn was used to experiment with weeds over a number of years. Darwin noted which species grew and predominated, and observed how the coarser plants eventually drove out the more fragile ones. This fed into his thoughts on the struggle for existence and his theory of evolution.

The ‘Wormstone’ is still visible in the grounds. This is a circular stone slab where Darwin and his son Horatio measured the movement of soil that was displaced by earthworms moving underneath the stone.

The greenhouses held a collection of insectivorous plants. Darwin was first to show that these plants gain nutrients by digesting insects on their leaves. Darwin grew climbing-plants in pots in the greenhouses and observed the movements of their stems as they searched for support as they grew. He noted how they responded to different light conditions.

As well as being a place for practical experiments, the grounds of Down House provided Darwin with great inspiration. Beyond the garden, there was his 'sand walk', a path around a small wood, on which Darwin took his daily exercise. He called it his ‘thinking’ path and walked around it five times, every day, at midday. No doubt this helped focus his thoughts on perhaps his most famous book, On the Origin of Species, which he wrote in the Down House study.

The change in genetic traits and appearance of an organism over time to adapt to local surroundings.