Magnetic resonance imaging or scanning (MRI) is a medical technique for observing inside the body, without using invasive techniques such as surgery, dyes or X-rays. It uses magnetism and radio waves to produce clear images of body tissues that contain water. 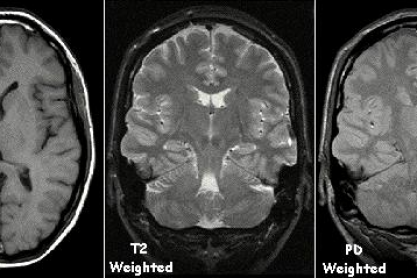 The history of MRI scanning can be traced back over a century, with scientists from many different disciplines making contributions to allow MRI scanning to be commonly used today.

The first step towards MRI scanning came in 1882, when the Serbian-born inventor Nicola Tesla discovered the rotating magnetic field and proved that the Earth could be used as a conductor. Also in the 1880s, Irish physicist Sir Joseph Larmor was the first person to calculate the rate at which energy is radiated by an accelerated electron, and the frequency at which the nucleus will absorb energy.

The results of an experiment that showed how atoms behaved in a magnetic field were published by Gerlach and Stern in 1924.

Nuclear magnetic resonance (NMR) was discovered by Austrian physicist Isidor Rabi in 1937. NMR described the way magnetic fields and radio waves cause atoms to emit tiny radio signals. Rabi was awarded the Nobel Prize in Physics in 1944 for his discoveries.

This was followed in 1946 by Felix Bloch and Edward Purcell’s discovery of the magnetic resonance phenomenon, originally used as a means to study the composition of chemical compounds. They were awarded the Nobel Prize in Physics in 1952 for their discovery, but it was not until the late 1970s that it started to be frequently used in hospitals.

In 1956, MRI machines were calibrated in ‘tesla units’, named after Nicola Tesla. The stronger the magnetic field, the stronger the radio signals that can be produced from the body’s atoms and the higher the quality of the MRI images.

Raymond Damadian, a physician at the Brookyln’s Downstate Medical Center, discovered in the 1970s that signals given off from hydrogen in cancerous tissue are different from healthy tissue, as tumours contain more water and therefore more hydrogen atoms. When the NMR machine was turned off, the radio waves from cancerous tissue lingered more than those from healthy tissue.

Also in the 1970s, Paul Lauterbur of the State University of New York in Stony Brook, produced the first NMR image of a test tube.

Ljunggren and Tweig discovered the concept of k-space in the 1980s. This described the data matric containing the raw MRI data. In the same decade, Denis Le Bihan published an article in radiology, describing diffusion weighted imaging (DWI) and in 1987, real time magnetic resonance (MR) imaging of the heart was developed.

The first MRI of the brain was introduced in 1993, when Dr Aaron Filler and his colleagues described a technique which is important in imaging neural tracts. In 1994 the first MR units were installed in the Brigham and Women’s Hospital in Boston, developed by General Electric and Harvard.

In 2003, Paul Lauterbur of the Biomedical Imaging Centre at the University of Illinois and Sir Peter Mansfield, a physicist at the University of Nottingham in Britain, were awarded the Nobel Prize in Physiology or Medicine for their discoveries which led to the development of modern MRIs.

In the first years of the 21st century, cardiac MRI, body MRI and fetal imaging techniques have become further advanced, and have become routine in many imaging centres.