Human papilloma viruses are more commonly known as HPV. They can affect the skin and the moist membranes that line parts of the body. 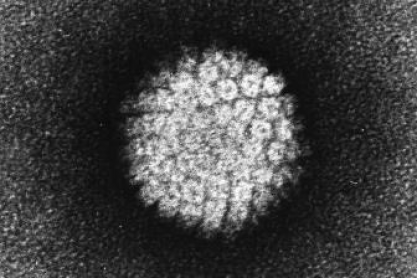 There are more than 100 different types (or strains) of human papilloma virus (HPV) and each type has a different number. Some types of HPV can cause changes in the cells of the cervix or the lining of the mouth and throat. They are known as high risk HPVs and the changed cells have an increased risk of becoming cancerous. Types of HPV that do not usually cause cell changes, which instead produce warts and verrucas, are called low risk HPVs.

HPV is common and most people will have the virus at some time in their lives. For most people HPV has no symptoms and goes away on its own. It is more common in young people and this is most likely due to immunity to the virus developing as you age.

The hypothesis that HPV could cause cervical cancer was first proposed by Harald zur Hausen in the 1970s. He continued to research his theory for over ten years; looking for evidence of HPV forming in tumour cells using probes for known HPV.

The prize was awarded jointly with Françoise Barré-Sinoussi and Luc Montagnier for their discovery of human immunodeficiency virus.

HPV vaccines prevent infection with the HPV types 16 and 18 which cause 70% of cervical cancer have recently been made available to young women in countries such as the UK, US and Australia to help reduce cervical cancer rates.