Dolly captured the public imagination and she has helped to change our perceptions of biology. Her birth overturned the assumption that the process of differentiation was irreversible. 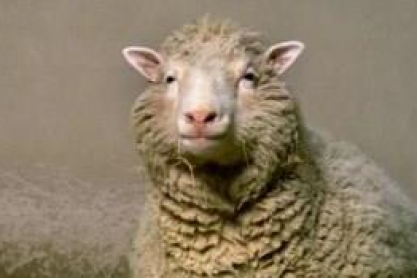 Dolly was the first mammal to be successfully cloned from an adult cell. Several clones had been produced before Dolly, but these were all from the DNA in embryos. Dolly demonstrated that even though the DNA from adult cells had specialised as one type of cell, it could be used to create an entire organism.

We have about 200 types of cells, containing the same 30,000 or so genes, but they differentiate into particular roles. Dolly demonstrated that it was possible to take a differentiated cell and turn the clock back, reactivating the silent genes and making it behave as if it were an egg.

To produce Dolly, scientists used a cell from the udder of a six year old white sheep. The cell was injected into the unfertilised egg of a black faced ewe. Once the cell had developed into an embryo it was implanted into a surrogate mother, another black faced ewe. Dolly was born, with a white face, on 5th July 1996. She was a genetic duplicate of the animal from which the single cell was taken, although the mitochondria (the power plants of the cell outside the nucleus) in her cells were inherited from the egg donor mother.

Cloning technology has led to new ways of producing medicines and it is helping our understanding of genetics. Dolly was produced as part of research into producing medicines in the milk of farm animals. Researchers have placed human genes, with useful proteins, into the milk of sheep and cows. This has enabled them to produce the blood-clotting agent factor IX, which treats haemophilia, and alpha-1-antitrypsin which treats lung conditions including cystic fibrosis. Inserting genes into animals is a long process but cloning allows it to be done once. The transgenic animal can then be cloned to build up breeding stock.

In order to let Dolly live as normal a life as possible she was allowed to breed, and she gave birth to six lambs. In 2001 she was seen to walking stiffly, and X-rays confirmed arthritis. This fuelled the suspicion that cloned animals aged prematurely but the cause of the arthritis was never established.

Currently the practical application of cloning and copying livestock seem limited but the likelihood is that the longer lasting benefit will be a change in the perception of biology. It has increased our understanding that our cells are a lot more plastic than previously thought and in time this understanding may help to augment research into the body’s normal repair mechanisms.

A plaque to commemorate Dolly will be unveiled soon as part of the Biology: Changing the World project.