Cavendish Laboratory At the forefront of experimental physics

The Cavendish Laboratory in Cambridge was founded for experimental physics, but it has also been the site of a number of breakthroughs in biology. Among its 29 Nobel laureates are Dorothy Hodgkin, Francis Crick, James Watson, Max Perutz and John Kendrew. They all won the Nobel Prize for their work using physical methods to look at the structures of biomolecules. 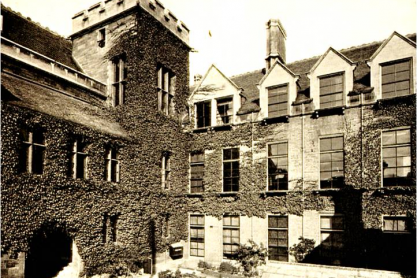 The Great Exhibition of 1851 that showcased manufactured products and an increasingly industrialised society demonstrated the need for the practical training of scientists and engineers. The Cavendish Laboratory, dedicated to experimental physics, opened in 1874. It was named after the Chancellor of Cambridge University, William Cavendish, who had financed the building. It is now the Department of Physics at the University of Cambridge.

The Cavendish professors who have worked there over the years have helped to change our understanding of the physical world. Lawrence Bragg and his father William formulated a simple, yet far-reaching, Bragg’s law. The law describes how radiation scatters, or diffracts, after hitting an object. It is now used in X-ray diffraction to study the molecular structure of crystals, known as X-ray crystallography.

John Desmond Bernal was the first lecturer in Structural Crystallography at the University of Cambridge, and he became assistant director of the Cavendish Laboratory in 1934. Dorothy Hodgkin joined Bernal’s group, and together they took the first X-ray photographs of protein crystals. The only thing the snapshots showed were vast arrays of dots, but the advancement was important for future steps in the study of the three-dimensional structure of proteins.

In 1947, Max Perutz and Lawrence Bragg, then director of the Cavendish, convinced the Medical Research Council (MRC) to fund the creation of a Molecular Biology Unit within the laboratory. This attracted a number of scientists, including Francis Crick and James Watson, who saw the potential of applying physical methods to solve biological problems. Within the multi-disciplinary environment, Crick and Watson bounced ideas with many other scientists and built their model of the double-helix of DNA.

In the meantime, Max Perutz was developing a novel method that would revolutionize X-ray crystallography of large biomolecules. He and John Kendrew built upon the work of Bernal and Hodgkin and established the first three-dimensional structures of proteins using X-ray crystallography.