Hear the word X-ray and you probably think of hospitals and human skeletons, but Dorothy Crowfoot Hodgkin used X-rays to reveal the molecular ‘skeletons’ of penicillin, vitamin B12 and insulin. Her discoveries have allowed us to better understand a range of illnesses, including diabetes, and in some cases to make synthetic versions of proteins as a treatment. X-ray crystallography continues to be an important tool in understanding disease and designing new medicines. 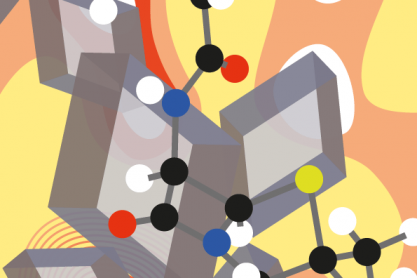 As a child, Dorothy was fascinated by crystals and enjoyed analysing rocks and minerals she found while living with her parents in Sudan. Back in England, her school let her and one other girl study chemistry. She was given a book Concerning the Nature of Things, written by physicist Sir William Henry Bragg. It was this that first inspired her interest in X-rays.

In 1932 after completing a degree in chemistry at Oxford she took a PhD at Cambridge where she was one of the first people to use X-rays to study the structure of biological molecules. She then returned to Oxford where she received a fellowship for her research and worked with many students over the years (including Margaret Thatcher), becoming a leader in the field of X-ray crystallography.

To perform this technique, Dorothy took a tiny crystal of an antibiotic, such as penicillin, and subjected it to X-rays to reveal the complex pattern of small dots. Through mathematical calculations, she used this pattern to work out the 3D molecular structure.

I was captured for life by chemistry and by crystals

Dorothy established the structures of the antibiotic penicillin in 1945 and the essential dietary factor vitamin B12 in 1954. For this work, she was awarded the Nobel Prize in Chemistry in 1964. After a first look at insulin in 1934 Dorothy had to wait 35 years for technology to catch up before she could solve the structure of this much larger protein in 1969.

X-ray crystallography was just part of her work. Dorothy was also interested in humanitarian causes such as the Pugwash movement that worked to address the dangers raised by scientific research. She continued to pursue this interest after retiring from Oxford in 1977 and was Pugwash president from 1976 until 1988. Dorothy achieved all this in spite of the rheumatoid arthritis she had developed at the age of 28, which caused her hands and feet to become painfully deformed and eventually led her to spend much time in a wheel chair.

Dorothy's love of crystals, combined with her determination, led her from being one of only two girls allowed to study chemistry at school, to being one of only four women to be awarded the Nobel Prize in Chemistry.

This page was written by a Biology: Changing the World volunteer.