Angelina Fanny Hesse is a largely overlooked and forgotten woman in biology. While not a scientist by training, she was instrumental in the development of the agar plate that is now an invaluable medium for growing and examining bacteria. 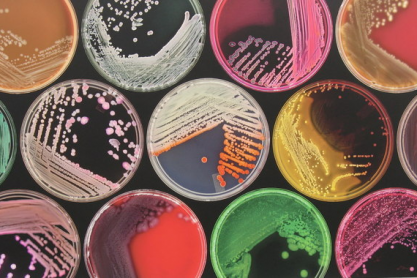 In the early days of microbiology, scientists were finding it difficult to isolate and grow single strains of bacteria. That is until Angelina Hesse brought her culinary knowledge into the lab in the early 1880s. Hesse was perhaps most introduced as the wife of Walter Hesse, a microbiologist working in Dr Robert Koch's laboratory, where she was also an assistant and scientific illustrator.

Koch had been trying to isolate bacteria that caused deadly diseases such as tuberculosis and cholera. To grow the bacteria they required a medium that could provide food for the bacteria and didn't dry out. At first Walter Hesse, researching airborne microorganisms, was using gelatine as the soft solid medium. Walter's wife Angelina would cook a nutrient-rich broth to which gelatine would be added to, and when set would be used in the lab to transfer bacteria onto it.

However, Walter found that the bacteria were not only eating the nutrients in the broth but also the gelatine itself, which was ruining the experiments. The gelatine would also melt at the temperatures required for incubating bacteria. It was Angela at this point who came to the rescue. She suggested the use of agar as the solidifying agent for the broth, in replacement of gelatine. Agar is a jelly-like substance derived from algae and used widely in Asia for soups and desserts. Angela herself learned about it through a Dutch friend who had travelled to Indonesia.

Thus did a modest housewife perform a service to science and humanity. […] Could not "plain agar" from now on be designated as "Frau Hesse's medium"? Her contribution to bacteriology makes her immortal.

Hitchens and Leikind, The introduction of agar-agar into bacteriology, 1938

With the use of the agar medium, many obstacles hindering Koch's and Walter Hesse's work were solved. Agar could thicken and solidify nutritious broths, was indigestible to most bacteria and could withstand high temperatures. Additionally, it allowed a fellow researcher in Koch's lab, Julius Petri, to develop the Petri dish so famous and widely used now in laboratories worldwide.

Unfortunately, neither Koch nor Petri acknowledged Angelina's involvement in their ground-breaking discoveries and inventions in which she was so instrumental. As such, Angelina remains a highly unsung heroine of her age.